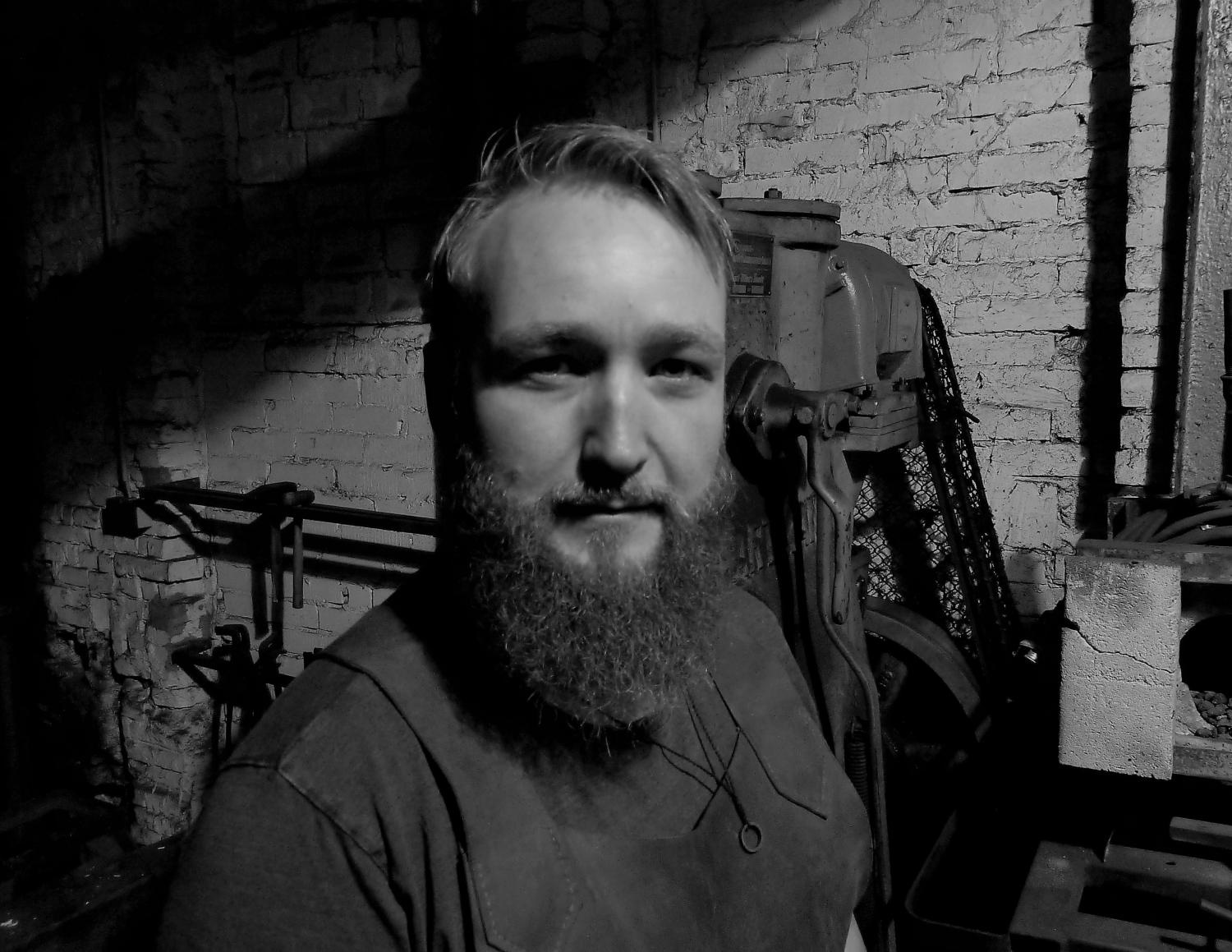 All began a few years ago when I was visiting my parents. By chance an old family friend was also a guest. It was a tipping point of my life. Back then I was living a crisis. I was preparing a teaching degree but I was torn apart because I had realized that I did not want to become a teacher. "What should I do my life?" was my burning and long-lasting question. We shared with this friend and my parents a nice diner and few glasses of wine. Then our friend took me apart and drew a metallic object out of his pocket. It was a nail that had been roughly and approximately forged into a knife. The handle was just warped with a leather strip. At first glance I though he wanted me to give my opinion about it. But he actually wanted to tell me a story of this little knife, a story which I had forgotten by now.

" I forged this knife when I was five. Then I gave it to this friend. The necessary heat had been generated through a campfire with the help of small bellows. I had used a flat stone as an anvil."

When this key evening took place, I was studying in Oldenburg. I had already established a small workshop. Few days per month I was forging and selling knives to earn a little extra money for my studies. My future was to become a teacher in history and economics. That was what I believed until that evening. My parents had always been skilled at understanding what was driving people. It was my father who said when our friend showed the blade: "Well, it is not going to be easy, but we cannot imagine something else for you!" My path had already been set when I was a child, but only from this day I knew where this journey would take me.

"Here I am doing what I do do!" I am a knife maker and there is nothing else I can do.

Still, I decided to complete my studies in history and economics. Not because of interest or pride, but because I am not the type of guy who leaves something unfinished. To complete this tasks I was helped an open-minded professor in history, with whom I could write a thesis on "the techniques of pattern welding steel in middle age." But my heart (and my hands three days a week) were already in my Meister´s workshop (Meister = Master craftsmanship, the highest qualification in craft in Germany) . After three years I graduated in mechanical engineering and precision mechanics with 1.0 (this is the highest possible grade in Germany, equivalent to 4.0 in USA)

How did it all begin?

The path that led me to become a knife maker began when I was 10 years old: a neighbor offered me a small 30 Kg anvil for Christmas. He retrieved it from a pile of scrap. At the time it was the best present I could have gotten. Even today, I use this anvil to straighten blades: every knife that that leaves my workshop is hammered on this anvil! At the age of twelve, I set up a small workshop in an old stable at my parents. I benefited from the numerous friends of my parents to equip the workshop. Over the years I could gather a small forge, a set of hammers and tongs, a bench grinder, a belt grinder and a workbench with a vise. Later, I build a gas forge and furnace. More or less by accident, I discovered that different steels could be forged together. Moreover I noticed that the blades I was making were harder when I was following specific sequences of temperatures. It is only years after, that I connected these empirical findings with the metallurgic theory. I owned my first computer when I turned 22. This allowed me to exchange with other knifemakers. They were stunned by the pictures of flawless damacuss blades that I forged as a teenager without any formation. Over the years I perfected my skills. I also learned new techniques and new crafts from experienced blacksmiths. After I completed my apprenticeship, I decided to start my business. This was the beginning of the three most difficult years of my life!

I planned everything meticulously. First I found an empty warehouse in which I could set up my workshop according to my vision. I had the support a start-up loan and the authorities approved my building application. Moreover, I calculated that I should have had enough money left after the completion of the renovation for a quiet and confidant start. Yet events have not unfolded as planned. In the middle of the renovation and reconstruction work, I received a letter from the business authorities. They were worried about safety of the neighbors. They ordered an immediate halt of the construction and required an official report on whether potential noise and vibration would constitute a intolerable nuisance. This resulted in a 4-months cessation of work, and an unplanned expense of 10,000€ for the expert report. On the top of this I had a bad accident and injured my back; I had to undergo heavy surgery. To make the picture even worth, we separated with my former partner in consequence of which I had to quit our flat. I had no other place than my workshop to sleep. So, at this time, I had a half-finished workshop, a broken back, no flat, no money and I was on the verge of being bankrupt because of the incompressible expenses I had. I was so desperate that I considered quitting everything. But I put myself together, bit my bullet and compiled all the contacts of the online retailers specialized in blacksmith products. After few days spent calling all of them, I received several orders for "white-label" blades. I made hundreds of unforged simple blades and knife blanks, and I ground blanks into knives for small wages. I lived day by day for quite some time, but I could pay the bills and that was the only thing that mattered.

Then a day, an old customer from the time I was a hobby knife maker contacted me. He came with a concept of a new revolutionary serie of kitchen knife. This customer was Sebastian Stiegler, a professional chef, who founded a famous German-speaking forum for kitchen knife (kochmalscharf.de). I had always been a fan of chefs knives for two reasons. First I love cooking and considered myself as a hobby chef. Second, kitchen knives are tools that are used on daily basis and not useless objects that collect dust behind a vitrine. The production of this small discontinued serie was the beginning of a new phase of my life. If you have read through this story and if you are interested in acquiring a knife that I manufactureed, you will soon be part of it.