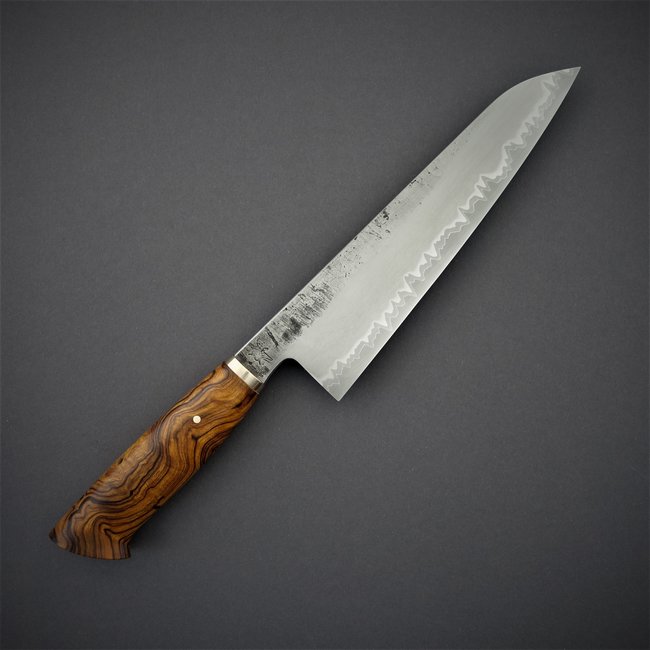 A Userfriendly with a blade made of TNT666 and a handle made of desert ironwood Lire plus..

The geometry of this gyuto is between a userfriendly and a laser. It has very cutting abilities while at the same time offering sufficient power reserves for carefree work.

The knife is primarily designed for push and pull cuts as well as chopping.

The cutting layer consists of a special melt that was produced exclusively for Achim Wirtz (steel dealer and producer). Several years ago, Achim Wirtz had a small quantity (approx. 80 kg) of this steel produced as a test melt as part of a university project. Since then, a few blades made of this material have occasionally appeared. Now there is a new edition of the former test melt, but this time only 400 kg of the steel were produced. So it remains a highly exclusive material.

TNT666 is an extremely wear-resistant, medium-alloy tool steel with a high level of hardness that can be achieved. Its wear resistance can easily compete with that of 1.2562. The steel forms extremely hard titanium-niobium and tungsten-chromium mixed carbides. At the same time, the total content of the special carbides is still low enough so that fine cutting edges are also possible. A rare material with very good properties.

Of course, the blank was forged with optimal temperature control and forming and then subjected to extensive heat treatment (including deep-freeze treatment after hardening). This guarantees an optimally adjusted structure and extremely finely distributed carbides.